So What’s The Deal With Greek Easter?

I’d only been seeing my Greek-Australian boyfriend (now husband!) for a few weeks, when he invited me to celebrate Greek Easter with him and his friends. I was a little confused because the date he was talking about was the week after Easter, and it was a Saturday night. It turned out I had a lot to learn about Greek Easter!

Most of Christianity calculates Easter according to the Gregorian calendar, but once you’ve been around Greeks as long as I have, you’ll understand that they like to do things a little differently from everyone else. The Eastern Orthodox religions calculate Easter according to the Julian calendar. This means that some years both Easters are celebrated over the same weekend, but other years they can be as many as four weeks apart.

During our recent trip to Sydney, both Easters fell on the same weekend, which is very special for our family because it’s made up of Greeks, Spanish Catholics, and a Scottish Protestant – that’s me.

For the Greeks, Easter is more important than Christmas. My Mother-in-Law goes to church every evening in the week leading up to Easter Saturday, sometimes for several hours. Then on Thursday morning, she dyes the eggs. These symbolise the stone that blocked the tomb where Jesus lay, and they’re traditionally dyed red, which symbolises life and His blood. I’ve always thought that I’ve done something wrong with the eggs, because every year I end up with dye on my hands. But this year my Mother-in-Law assured me that everyone gets dye on their hands!

Here are some dyed eggs in the traditional red: 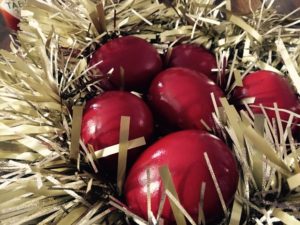 And with some little chocolate chicks to liven things up a bit: 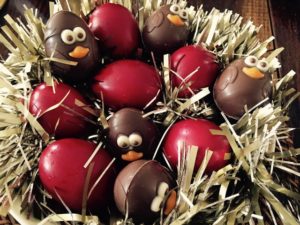 Easter Friday is a day of fasting for the Greek community, and even if you don’t fast, you’re not supposed to eat meat. Since my sister-in-law is Catholic, and they don’t eat meat on Good Friday either, we had the best Spanish tortilla I’ve ever tasted and a tub of giant prawns for our tea at her house that night.

While every day in the lead up to Easter is important to the more devout, Easter Saturday is when everyone joins in, and in Orthodox churches around the world, people gather to conduct a midnight vigil. There’s never been enough room within the churches I’ve attended for Greek Easter, so the service has been relayed by megaphone to the throngs outside.

We turned up to our family’s local Greek Orthodox church at around 11pm and I went inside the church for a while with my Mother-in-Law. We lit small candles as we went in, and all the Orthodox worshippers kissed two Idols at the entrance. I’m a bit adverse to other people’s germs so I gave that a miss.

Once we were back outside we bought long candles and found our family and friends. We all stood around chatting until the service began in earnest, at which point the priests brought out the Eternal Flame and used it to start lighting the candles. The light was passed from candle to candle until everyone’s candles were lit. Looking around and seeing hundreds of candles lit is a very pretty sight, and for the duration of the singing and chanting, I had a real feeling of peace and tranquility.

Once Easter was declared, however, I began to regret the amount of hairspray I’d used earlier in the evening. Because from the moment someone said “Christos Anesti” (Christ has risen), people were coming towards me with all good intentions of wishing me Happy Easter, but with a lit candle in their hand. Which got thrown over my shoulder or the shoulder of the person next to me, with little regard for who or what was in the path of the flame.

Then, as we made to leave, while most of the younger generation had extinguished their flame, the older generation had not! In fact, they were doing whatever was necessary in order to keep theirs lit. The sensible ones had brought a lantern, but they were definitely in the minority. The rest walked towards the road, all the while watching their candles to ensure they didn’t go out. That meant they weren’t looking where they were going, so the rest of us had to be hyper vigilant. Especially about who was behind us and how close they were!

Then of course, the naked flame has to be transported home. In the car. Which is fine, because obviously nothing in a car is flammable… The reason for all this danger, is that this is a holy light, and it’s used to bless the house before you enter, and then to light the lantern-that-can-never-be-extinguished. So we braved the danger of my Mother-in-Law and her candle, the house was blessed, and we could finally enter.

You may be thinking that I would be looking forward to going to bed now. After all, it’s around 1am. But that brings me to the next part of Greek Easter. Due to the fact that we’re supposed to be fasting, we now have to break our fast. The adults in our family do that with a traditional soup called Mayiritsa, which is made with tripe. The kids (now in their 20s) and I, have a lemon and rice soup instead. Then there’s spanakopita – spinach and feta pie, and finally those dyed eggs get their turn in the spotlight. Because for some reason I’ve yet to fathom, there’s now a kind of egg tournament. Everyone gets to choose an egg, and then you turn to your neighbour, put your egg above or below theirs, make sure both eggs are jousting with the same end, say ‘Christos Anesti’ (Christ Has Risen), wait for the reply ‘Alithos Anesti’ (Yes He Has Risen), and then egg-joust. So the person on top will bring their egg down on the other one, and if your egg breaks you’re out. This goes on until there’s someone with an unbroken egg – the champion. They’ll have contested all the other unbroken ends of egg, and come out on top. This year, I had the champion egg! Hooray! That means I’ll have good luck for the next year 🙂  Here’s what a champion egg looks like: 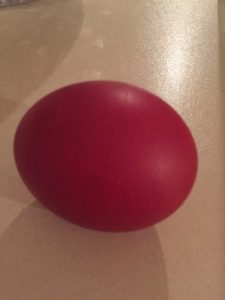 After that, we went to bed. Thankfully. Because the next day we were invited to join some extended family for their Easter celebrations. Which were epic. There was so much food. My top tips if someone invites you to a Greek Easter barbeque, are to eat nothing before you go, and to pace yourself once you’re there. Here is some of the food being cooked. Yes, that’s right, some of the food. Not all of the food!! 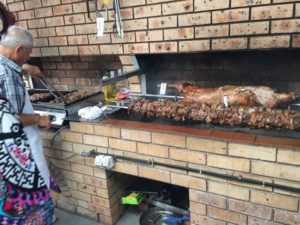 Yes, that’s a whole lamb on the spit there. And in front of it, there are two massive skewers of lamb chops. And out of shot there are another three of those skewers being roasted on a standalone spit. And then there’s the countless skewers of souvlaki, and ribs being grilled on the left of the picture. Add to that the salads, potatoes, bread, pita, spicy sausage, dips, and then deserts. That’s a lot of food. And no, they were not feeding the entire community! It was an incredible afternoon, and funnily enough, we didn’t need anything for our tea that night!

There’s definitely something very special about a Greek Easter, and if you get the opportunity to celebrate one I’d recommend grabbing it with both hands. It can feel a little disorienting to be eating at 2am, but you get over it pretty quickly. Especially if Greek Easter is the same weekend as ‘normal’ Easter and you have the Monday off work to recover. 🙂

If your business blog is looking a bit sparse and you’d like to change that but never seem to find the time, click on this link to find out how I can help you 🙂