The Joy Of A Hybrid Dog Walk

I have many reasons to be grateful, and two of those reasons are my family’s holiday home in Kenmore, and having Kimber. Not necessarily in that order, although I can hear Kimber tearing some paper apart in the next room, so let’s hope that’s nothing too important…

We travel up to Kenmore several times a year: sometimes for a week, or even two, but more often for the weekend. Thanks to mobile wifi gadgets, we can even take a long weekend if the husband has a work-from-home day on a Friday. Which is what we did last weekend. We drove up on the Thursday evening, and awoke to the most beautiful sunshine the next day. While the husband walked Kimber and then got down to work, I headed into Aberfeldy for some novel planning, a chat with some friends, and some shopping.

After lunch back at the lodge, it was my turn to walk Kimber. This has been one of the biggest bonuses in having her. While the husband and I went for walks before we got her, since she joined our family we don’t have any excuses for not getting out into the fresh air, which means we do it a lot more often. And if we want some peace and quiet when we go out for dinner, a big walk is essential.

Thankfully there are no shortage of amazing walks in and around Kenmore, many of them right on our doorstep. Two of my favourites are along the north side of the River Tay; and the various trails around Drummond Hill. Up until recently I’ve always felt that I have to choose between the two, and sometimes that can mean I only get to do one during a weekend trip. But in the week following New Year I discovered that I could combine the two. On following the path along the river, I decided to explore a track off to the left that I knew led to the road that runs between Drummond Hill and the fields that flank the river path. I wanted to know if there was a way onto the hill near to there, and I discovered that there was a path directly across from where the track meets the road. When Kimber and I followed it, we found that it led to the final third of the red route around Drummond Hill.

This knowledge came in very handy on Friday, when Kimber and I had to create a hybrid walk on the spur of the moment. It was after 3pm when we set out, which in hindsight was a bit late even with the days getting longer. We walked up Drummond Hill to the Black Rock Viewpoint, which for two-thirds of the way is a pretty steep climb, and a good workout if, like me, you’re not the fittest! After the steep bit you come to a crossroads: you turn left to get to the Black Rock Viewpoint; right to continue on the red route; and straight ahead to pursue other routes further up the hill. So we turned left. It was a stunning day and when we got to Black Rock the view was spectacular. Kimber loves the Black Rock Viewpoint as she usually gets a treat, and she loves to toss the pinecones around and then charge around the battlements. Here she is on Friday, happily sitting for her photoshoot at the Black Rock! There may have been a treat in her immediate future… 😉

After some photos and admiration of the view, we began to walk back. As there seemed to be a good amount of light left, rather than follow the path back the way we’d come, we carried straight ahead at the crossroads to follow the rest of the red route. The way it’s designed is that you walk for about a mile down the hill, then turn back on yourself and follow an undulating path back through the forest, and end up pretty much back at the carpark at the bottom of the hill. So if you didn’t walk up to the Viewpoint from the crossroads, you’d be walking in a big, misshapen circle. We passed some areas that had been deforested – is that a word – and it was a novelty to catch the odd glimpse of the scenery down below.

We walked down the hill to the point where we’d be turning back on ourselves to go through the forest, but i was a bit worried about how much daylight we had left. I could see that the sun was setting, and the forest is dark at the best of times. So instead of taking the risk, we walked down the steep path we’d found at the beginning of the year, and ended up on the river path. The setting sun was beautiful on the path and the surrounding fields. And even better, we met an older gentleman with his two lovely dogs, and he took the time to stop and chat, telling me stories about when he’d lived in Kenmore.

By the time we got back we’d been gone for two hours – it was quite a good chat – and we’d covered more than five miles, or eight kilometres. I definitely felt as though I’d earned my steak and wine at the Kenmore Hotel that night! Here’s Kimber after the walk. I always think you can tell how much fun a walk has been by how muddy your dog is… 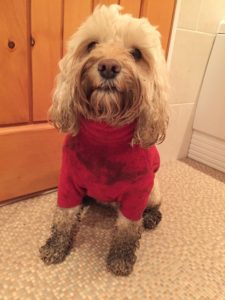 The weather wasn’t that great on Saturday, so we stuck to a few shorter walks. But on Sunday it was glorious once again, so I decided to do a hybrid walk on purpose. I know, what a rebel!

This time we set off along the river path and then crossed the track and road onto Drummond Hill. There’s the shell of a very unusual house that’s built into the rock of the hill at the foot of the path, which has always fascinated me when I’ve passed it. Worth a look if you’re in the area, and a good marker for the start of that path. We climbed the steep path, Kimber reluctantly at first, and although it was a shorter climb than on Friday, it still felt like a good workout! Then at the top of the path we took the first left to walk along that undulating forest path I was talking about earlier.

You could take the path a few yards further up and follow it to the crossroads and then turn left to go back down, or straight ahead to the Viewpoint, but for some reason I just don’t like walking up that bit of the hill. It’s not as steep as the other paths, but it’s longer I think. Anyway, my preference from that point is the path through the forest. It can be steep in places, but after you go up, you go down, and towards the end it evens out a bit more. I love walking through the forest: I think you can get a lot of energy from being surrounded by trees. It was a great walk, and quite a bit shorter than Fridays. We were out for about and hour and ten minutes, and covered just over three miles, or five kilometres. Even though it was shorter, Kimber got almost as muddy, as you can see from this photo! 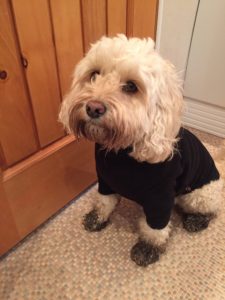 I was reflecting on our weekend away earlier today, and I love that I’ve been able to take two of my favourite walks and turn them into four fantastic walks, just by mixing and matching different elements of them. It’s not something I’d have thought of before, when I saw them as separate walks, and an either/or choice. Maybe in opening my mind to other possibilities and finding a way to combine the two walks, I can find other parts of my life where I’ve become stuck in my ways. Areas where I could benefit from a different perspective and being open to other ways of doing things. I shall keep an eye out and see if I can recognise them. Watch this space!!

PS If you’ve been trying to get into blogging for your business, but can’t seen to get off the ground or stick at it for more than a couple of weeks, I can help. Check out how by clicking this link 🙂