The Joys Of Cooking With Fire

Nostalgia is a natural by-product of progress, and it’s thanks to nostalgia that we’ve gone a little bit retro in our household. Specifically when it comes to cooking outdoors. And it seems that we’re not alone in reverting to how we did things in the past.

When it comes to change, most of us are naturally programmed to resist it until we’ve assessed the risks. Or at least recognised the benefits. But as technological advances accelerate, and we’re told time and again that change is good, and that progress is inevitable, we come under increasing pressure to embrace it without considering what it really means for us. Well, some people are slamming on the brakes and working out what we’ve lost along the way. They’ve decided that some of our past needs to be rescued.

So vinyl records are back, and they’re even being sold in Sainsbury’s! This love for vinyl makes my parents look particularly trendy, as they have not one, but two turntables in their house. Another comeback that most would have struggled to predict, is for the Nokia 3310: great news for those people who want to use their phone to make phone calls and send text messages. But don’t worry, if you get stuck on the train, you’ll still have Snake to keep you occupied 🙂  Will and Grace are also making a comeback, which’ll be interesting. And there are rumours that ex-MD, Tony Banks, is trying to bring Woolies back to the UK High Street.

But for us, it’s all about the barbeque. After singing the praises of the gas barbeque for more than a decade, we’ve about-faced and bought the cutest, dinkiest little charcoal one.

It all came about after a recent trip to Australia. The husband’s brother decided one day that we’d have a barbeque. But instead of heading to his outdoor kitchen and switching on his hulk of a gas barbie, he headed to the garage, and came back with a metal box on legs and a bag of ‘Superior African Charcoal’! What?!?! Are you serious?! Talk about throwback! Now I don’t know about you, but the charcoal barbeques of my youth bring up memories of my parents being sloshed before the meat even saw the grill, such was the problem with lighting the damned thing. But the husband’s brother had no such difficulties and this was the result: 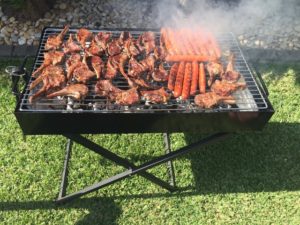 How appetising does that look?! The meat was delicious and we could really taste the flavour of the charcoal. After the husband’s parents pulled a similar stunt, we were sold! On returning to the UK I immediately started researching charcoal barbeques. I knew that if I bought the right one, we’d use it heaps, so I made sure that I had my criteria worked out before I started. I was prepared to pay for quality; I wanted one that was small enough for two people; it had to have good ventilation so that the charcoal got hot enough; and it had to be easily stored in the garage. The Weber Go Anywhere™️ was the winner. It’s absolutely perfect for what we need, and because of it’s cuboid shape, it’s going to be really easy to fit in the car if we want to take it anywhere. Here it is folded up for storage: the legs fold up to hold the lid on securely, and then you can just carry it around by it’s handle. 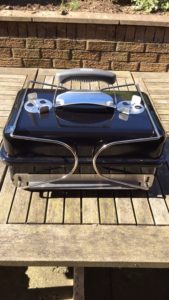 And here it is ready to use. The grill is the perfect size for two, although it can easily fit enough food to feed four. If you’re eagle-eyed you’ll have spotted a weird cylindrical item sitting within the barbeque. That is a genius charcoal-lighting device called a chimney. There’s a conical grill at the bottom and you put a couple of firelighters or some newspaper in that bit. Then you put charcoal or briquettes on top of the conical grill and light whatever material you’ve put in the bottom. We’ve found that the charcoal briquettes are then ready to cook within half an hour! No more struggling to light the barbeque and getting sloshed before you get a chance to cook the meat. Like I say, genius! 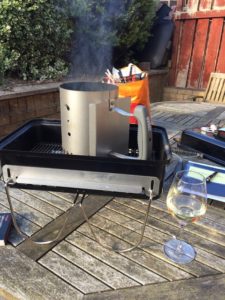 Of course the proof of the pudding is in the eating. Or in this case, the proof of whether this is a good investment is in the number of times we use it. Well, it’s so easy to use, and the food tastes so good, that in the first ten days of owning this fabulous cooking device, we’ve had four barbeques! During the first two weeks of May. In Scotland. And to demonstrate even further how easy it is, one of those occasions was me cooking my first ever solo barbeque. Without the Aussie! That’s how simple it is to light, cook, and put it all away again. Here’s what my lamb chops looked like: 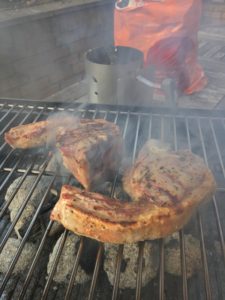 Yum! I’m pretty proud of those! As you can tell, I’m quite enthusiastic about this barbeque. In actual fact I’m much more enthusiastic about it in real life. So much so, that even before I’d taken delivery of it, my friend was talking to her husband about buying one. And when I reported back how amazing it all was, she promptly went out and bought one too. And the chimney charcoal-lighting thing, of course. They had their first barbeque with it last night, and I was happy to hear that I hadn’t hyped it up too much! She sent me a text to tell me that they thought it was amazing and really easy to use, especially with the chimney.

So for us, old-school barbeques rock, and beat gas ones hands down. Where do you think that retro beats progress?

If you put ‘write blog post’ on your ‘ToDo’ list on Mondays, and it’s still there when you finish on Friday, I can help you. Click on this link to find out how 🙂